Mention El Bulli and foodies all around the world would get hopping excited in their seats. El Bulli, the legend. El Bulli, the 5 times No. 1 restaurant in the world. El Bulli, the restaurant that shut its doors back in 2011. Shortly after, the three chefs behind El Bulli opened Disfrutar. Disfrutar – meaning to enjoy. Serving creative avant-garde dishes, the restaurant really left me speechless by the end of the meal. I opted for the 24-course Gran Classic (155€), which was recommended for first-timers. 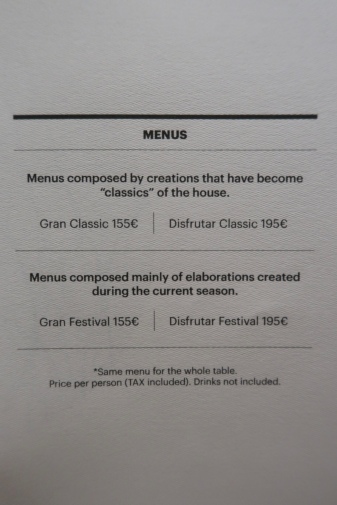 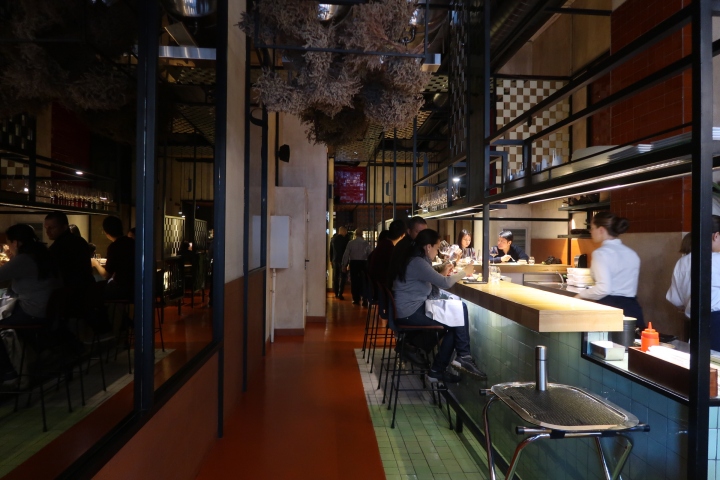 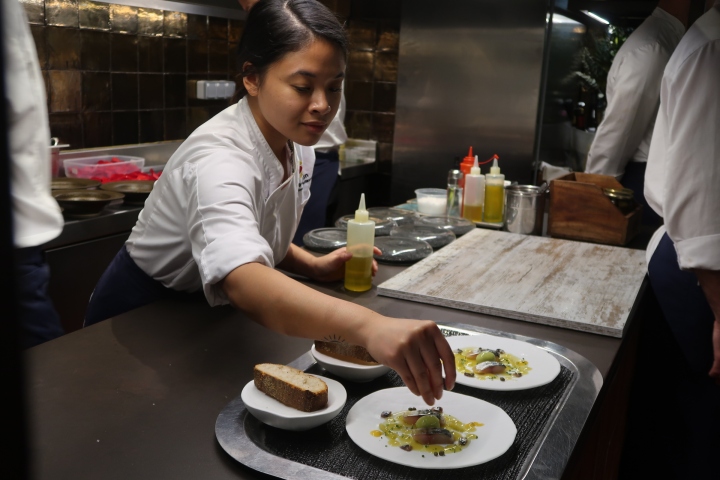 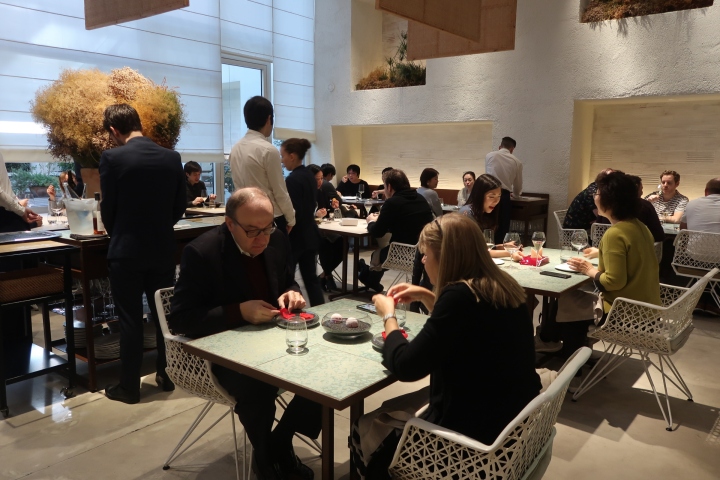 Read on for pictorial evidences of the phenomenal meal…

This first course scared me. It was so light and fragile I literally had seconds to eat it before it crumbled once I picked it up. It was a cold explosion of flavours in the mouth, with the citrus element of passion fruit picking up quickly with a gradual rum aftertaste.

The beetroot flavour profile is mild in this course but the food was slightly less crumbly than the first course.

We were instructed to have one of the lychee spheres, the lychee “raspberry” and then the last lychee sphere. Despite its minuscule size, the transparent spheres were incredibly concentrated in lychee flavour.

We watched as this cider was made in front of us and left to rest for a bit. Although made in seconds, this was one of the most amazing cider I have ever had in my life. it was surprisingly light and not overwhelmingly sweet, unlike most of the ciders out there.

This course consists of thick and rich Idiazabal cheese encased between two crusty and crispy mille-feuille. Cheese lovers would enjoy the intensity of the cheese.

This was one dish that I did not really enjoy as much as the rest. Gazpacho is typically served as a cold soup (made using blended vegetables), and is hugely popular in Spain and Portugal. In this course, it is served almost as a cream between two “sandwiches” which were so airy they felt more like puffs to me.

THIS. THISS. THISSSS. This was my favourite dish at the restaurant. Disfrutar has come up with a way to make “pizza” without using any flour at all. It resembled dry bread. But what really won me over, was the generous amount of black truffles lying atop the coca-pizza. With the strong fragrance of black truffles and bursting olive spheres, the different textures came together to perfection, nothing less.

Gilda – lollipop. The common gilda consists of an olive, anchovy and a Spanish pepper. This course here is Disfrutar’s version, which was a hearty one, not excessively salty.

This dish is easily my second favourite at Disfrutar. Two simple everyday ingredients. Egg. Mushrooms. Add a little magic in the kitchen. Ta-da! Biting into the crispy egg is akin to biting into a cream puff but with flowy egg yolk oozing out – kind of like an egg yolk puff! And that mushroom gelatin? Genius creation. The texture was so smooth and the best part of it is the intensity of mushroom flavour within. Superb and extremely impressive!

Ceviche is a seafood dish that comes from Peru consisting of raw fish marinated in citrus juices, accompanied by other seasonings including salt and onion. It is also something that I have never tasted before. As such, I am rather neutral about this dish.

Being a fan of seafood, I was delighted to see these clams served. Although I have never eaten razor clams before, these were extremely fresh and there was nothing to dislike about this dish at all!

This is one of Disfrutar’s signature dishes that have been with the restaurant since their very beginnings. This dish was served to me as I have indicated that I would prefer my dishes without any nuts (my dining companion was served a dish containing nuts). Essentially pasta made of gelatin, hiding under a blanket of carbonara cream sauce. The cream sauce was leaning on the thick side but the chewy texture of the pasta made it a manageable portion to stomach without being too cloying. An interesting dish.

By this course, I was already 95% full. Polvoron is a soft and crumbly Spanish shortbread made of sugar, milk, flour and nuts. Of course, this restaurant would not serve you something so typical. Their version is savoury with the olive spheres making an appearance once more. Standing tall behind these treats are the Liquid salad. As its name suggests, it. tastes. like. salad. This was light and helped to cleanse the palate for the courses after.

This dish is probably my third favourite at Disfrutar. Consisting of potatoes, lobster and parsley foam, it was a delectable course. The lobster was plump and sweet while the potatoes were cooked to a nice consistency, not too soft and not too hard. The parsley foam just added a touch of lightness to cut the heavier flavours.

This was something I could not really fathom although I quite enjoyed the warm temperature of this course. It tasted and had a texture very similar to potatoes.

This course left me amazed with the richness of corn within the yellow “tiles” you see on top and without a doubt, the resemblance to the real corn on the cob is uncanny and worth applauding.

This is the course which left me stuffed with its generous amount of meat. On first glance, those yellow spheres look like egg yolk. When I bit into them, I realised its corn. In fact, it tasted more rich than the actual corn on the top right corner. Again, Disfrutar’s creativity never fails.

This was a course I did not fancy as much as the foie gras was too overwhelming for me. However, if you are a fan of foie gras, you may enjoy this course much more.

This reminded me of Bengawan Solo. In particular, their pandan chiffon cake. Mmm, thinking of it makes me salivate… Strong pandan flavours were infused into the two chiffon-looking structures on the right and left which had an airy and light texture – almost like eating pandan clouds. With a tangy mango sorbet in the centre to balance the slight sweetness, my tastebuds were more than just pleased after this course.

There’s nothing much to comment about this course except that you would love this if you love black sesame, like me! This mini cornets had crispy, thin cones, were rich in black sesame, and the roasted flavour profile surfaced.

This dish scared me for I am just not a fan of pepper, regardless of colour. One bite and my worries dissipated. These peppers were coated with a layer of jelly. Within lies chocolate cream which had a tinge of bitterness. With the salt and oil, it added a touch of savouriness which was a surprise delight.

These were airy, crunchy coconut puffs which were light and delicious! The smaller one at the back had a cream centre and was slightly richer in flavour.

Cotton candy served on a branch of a cotton tree. How awesome is that? We were instructed to only take the bottom and the top one as the two in the middle were real cotton. I did not really know what to feel but I would say it is pretty innovative and smart at the same time. Popping one of these into your mouth is like having a mentos after a heavy meal – light and cleans the palate.

Verdict: Mostly hits with a few misses. Go with an open mind and remember that nothing is as it seems. If you have ingredients you prefer not to have in your food, let the staff know at the start so that you will have a wonderful experience as well. Definitely suitable for special occasions too!