If you have visited any Scandinavian countries, you would have realised that if there’s one thing that’s consistently expensive no matter which part of the country you go to, it has to be the food. In Stockholm, it is the same case as well.

If you really have to eat out, you will probably have better luck getting a more affordable lunch than dinner. In fact, many cafes and restaurants offer lunch deals which begins around 1100 and end between 1400 and 1600.

La Neta is one Mexican restaurant in the central area of Stockholm which offers lunch deals at 98 SEK. Available from 1100-1400, you get to pick 2 tacos alongside rice (that you can take until your tummy is filled up completely) and a soft drink.  There is also a sauces counter for you to add extra flavour to your tacos! 🙂

Unfortunately, when I reached La Neta, it was close to 1400 and there were barely any rice with corn left. 😦

The interior layout of the restaurant is not exactly one that is particularly fancy or intricately decorated. However, it does offer a practical seating area for a meal followed by a chat with a buddy.

I ordered the first and third item on the menu, which was Pork and Pineapple, and Beef, Pork and Guacamole.

For both Gringa (Pork & Pineapple) and Campechana (Beef, Pork & Guacamole), the meat were mostly both soft and tender. On the other hand,  the taco shells were thin and yet still carried a slight crisp with every bite.

With Campechana, the addition of guacamole also aids in adding a different texture and dimension. The flavour was also not too overwhelming which was definitely a PLUS point for me!

On the other hand, for Gringa, the sweetness of the pineapple played a pivotal role in complementing the savoury pork pieces. The only pity is that there were only a few pieces of the fruit in the taco. 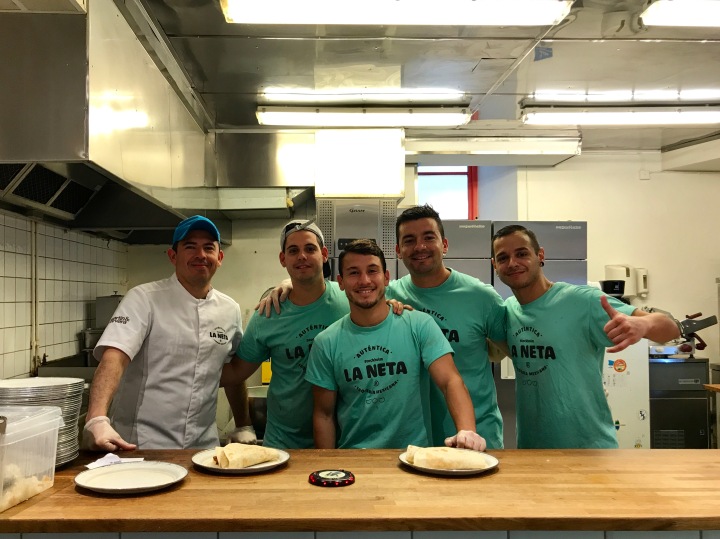 Also, thank you to the staff for the great service, including helping to translate every single item on the menu and having that great big smile, while on the job!

Not for its price but for its taste and quality, given that food is never truly cheap in Scandinavian countries. I especially liked that there is free-flow rice with corn as well during the lunch hours 😛