Recently opening at the basement of Vivocity, situated near to AOne Claypot House, is an Italian restaurant, Buono Trattoria. 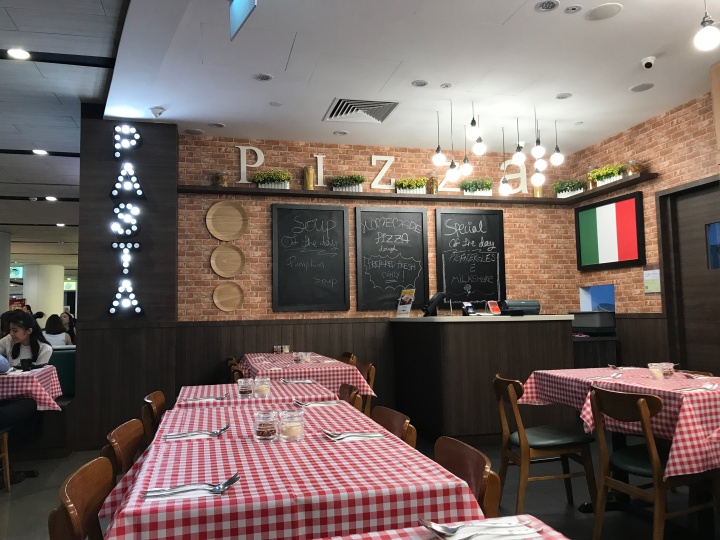 At your first glance across the restaurant, you will notice the iconic 2 words starting with P; Pasta & Pizza. Of a relatively fuss free interior, the restaurant was relatively empty at about 1145 AM on a weekday.

Although the restaurant doesn’t exactly adopt an open kitchen concept, you will be able to easily see parts of the kitchen from wherever you’re sitting. I ordered Carbonara in an attempt to settle my craving (for like 1 week?) while my friend got a Margherita Pizza.

I was seriously hoping for the Carbonara to be relatively decent, since it’s an Italian restaurant after all. And in all honesty, it’s served looking pretty fine! Unfortunately, the pasta dish is slightly on the dry side so it was a little hard to keep eating. Also, the noodles ended up tasting a little bland. It may have been a little better if the dish was topped with an egg.

The pizza is part of their lunch promotion which comes with a soup of a day and a drink.

Although online reviews mentioned that thin crust pizzas are the restaurant’s specialty, I wouldn’t deny that I was pleasantly surprised by the quality of the pizza. Disclaimer: I’m usually not a PIZZA PERSON, i’d choose pasta over pizza ( that’s why i made the decision to order carbonara xD)

THIS PIZZA THOUGH. Despite the fact that the tomatoes can be a little thinner, this pizza spells PERFECTION. Maybe I’m over exaggerating but good is kind of an underestimation of its taste. The use of thin crust aids in bringing out the flavour of the pizza’s toppings. The generous amount of cheese used definitely won me over as I can actually taste the cheese rather than just the tomato base! ( I mean, look at the second picture! 🙂 ) Although it was slightly burnt, the crust was crispy to the bite. I would definitely eat this again!

Based on the pizza alone. I’d say the online community definitely knew what they were recommending! The pizza is really an enjoyment. Go and try their Margherita Pizza!